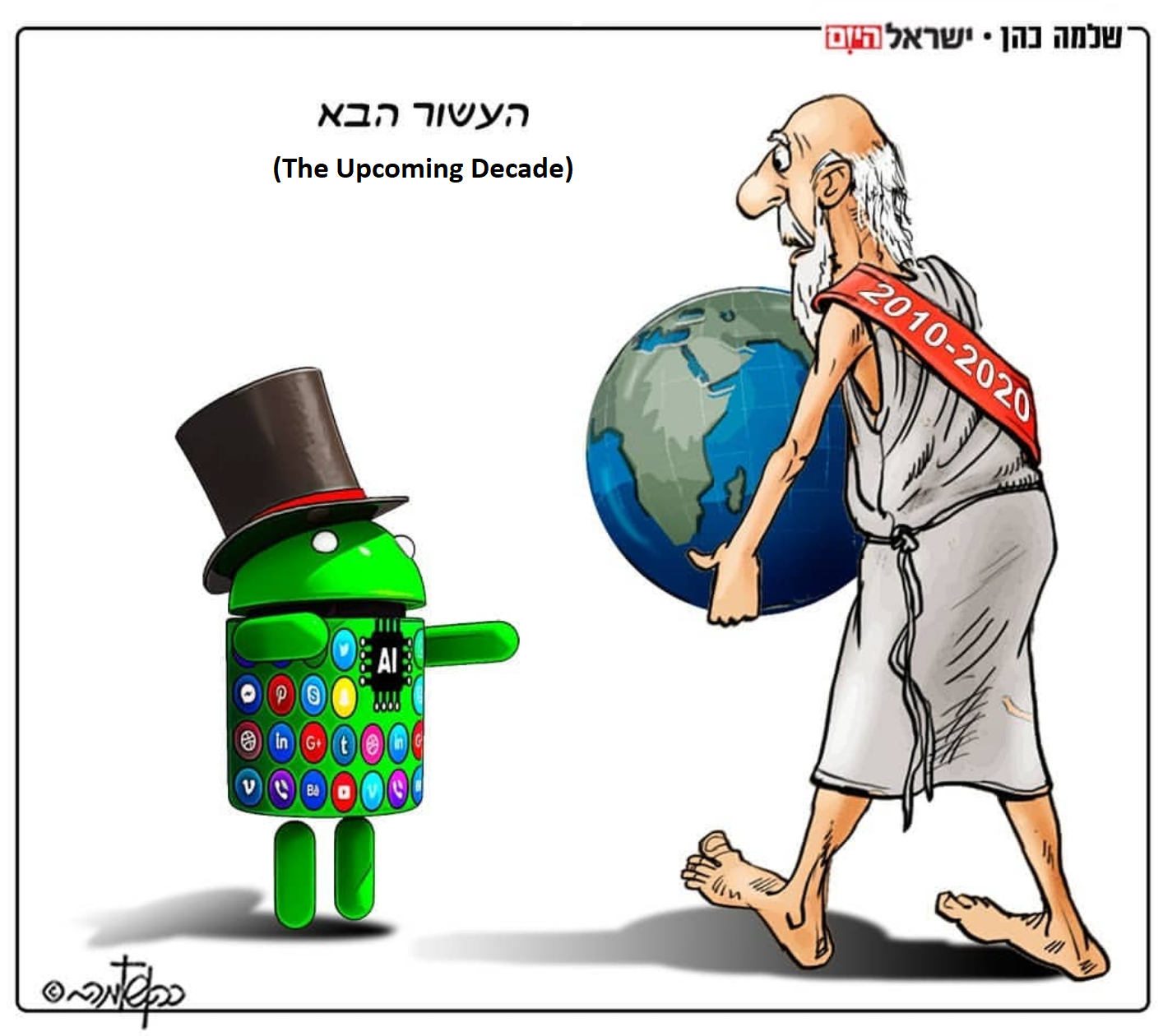 Over New Year’s Day, I saw the above cartoon that ran in the Israeli press; the image so vividly portrays one of the greatest changes that the world is likely to see during the 2020s: the mass replacement of human intelligence with Artificial Intelligence (AI), and the tremendous societal transformation that will accompany such a development.

While most people in developed nations have already become accustomed to various forms of AI technology – Alexa and Siri mean something entirely different today than they did in 2010, for example – we have only begun to scratch the surface of AI’s potential, and even that claim may be overstated.

The 2020s are likely to include advances in AI so major that they are hard to even picture today. By the end of the decade, AIs will not only automate tasks that today require tremendous amounts of human effort, but, on various critically-important matters, they will make better decisions in microseconds than teams of humans could make in any amount of time. AIs will also create and destroy entire industries. It is possible, for example, that self-driving trucks will not only become commonplace during the coming decade, but will, due to their inherently much greater efficiency than humans (they do not lose 1/3 of the day to sleeping, eating, and bathroom breaks), quickly replace all long-distance truckers in the developed world, a process that would certainly create societal shockwaves.

Before the close of the 2020s, AIs are likely to be making life-saving, and life-taking, decisions on a regular basis. All sorts of ethical issues and safety concerns will be raised, and major political battles will ensue – especially as the ability to create and utilize AIs creates an even greater delta between the lifestyles of “haves” and “have-nots” around the globe. Will individual humans seeking to rise out of poverty through the establishment of various businesses be able to compete with the decision-making skills of the finely-tuned AIs operated by their wealthier competitors?

Could the late 2020s also see AIs that write better articles, books, music, and movies than humans do today? Could AIs possibly become both smarter and more “creative” than humans within the next ten years? It is hard to picture such massive changes – but, it is certainly not beyond the realm of possibility. In fact, when it comes to AI, it is likely that many “people overestimate what will happen in a year and dramatically underestimate what will happen in a decade” – to paraphrase a quote attributed to Bill Gates.

We are certainly living in exciting times.

Happy New Year, and best wishes for a successful 2020.