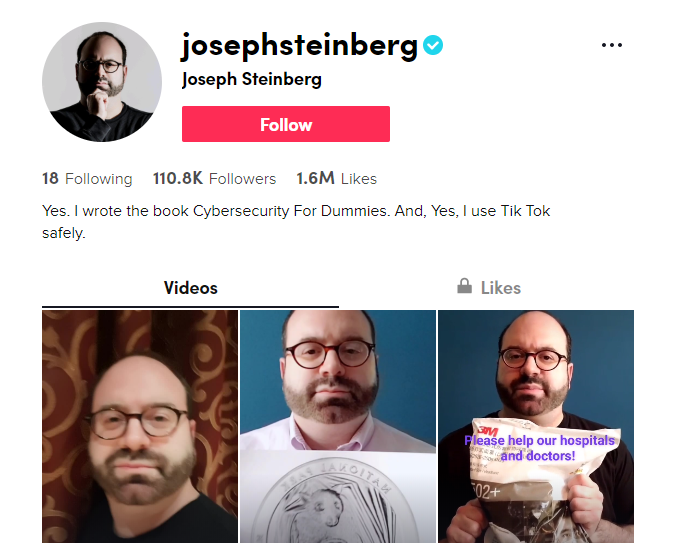 I Am A CyberSecurity Professional For 25 Years. Here Is How I Use Tik Tok Securely.

Some pundits describe the social media platform as an amazing outlet for young people to share their videos, while others consider it nothing less than a threat to American national security. Millions of people upload content to the video network every day – yet, India has banned the platform, various businesses including Wells Fargo have told employees to delete the Tik Tok app from company-owned devices, and members of the Trump administration are considering ways to dissuade, or even ban, Americans from using it.

But, if you are going to use Tik Tok, you can use it safely. I know – I have been using Tik Tok, and its predecessor, musical.ly, for almost half a decade, all while working as the CEO of a cybersecurity-related business, as an expert witness on cybersecurity cases, as an advisor to firms on cybersecurity-related matters. I was even quoted in the news media and in marketing books about the power of Tik Tok while writing the recently released book, CyberSecurity for Dummies.

Before we discuss how to use Tik Tok securely, let’s understand the core concern:

Tik Tok, like most social platforms, gathers data about its users. (Remember, if you are receiving a valuable service for free, you are likely not the services’s customer, but, rather, a component of its product.) While some folks claim that the Tik Tok app gathers more information than Facebook, and even gathers from the device data unrelated to the app, which may or may not be true at any particular point in time, the reality is that the type of data that Facebook gathers likely gives it far more detailed intelligence about its users than Tik Tok ever could assemble with its current platform.

The real issue with Tik Tok is that it is owned by a Chinese company, ByteDance. And, regardless of what a technology company promises in terms of privacy and security, all businesses must ultimately answer to the governments of the countries in which they reside and/or operate. In the case of communist nations such as China, the government in question may be able to easily obtain data from private parties at will and without demonstrating any sort of probable cause. Furthermore, in some countries – including China – it is impossible to know for certain that a technology business is not altogether under the influence – or downright control – of government agents. (In Communist economies in general there is significant blending between private sector and government.) And, there is little doubt that the Chinese government wants to collect as much data as possible on Americans.

Even if Tik Tok is not supplying any data to the Chinese government, therefore, the possibility that it will do so in the future (either by choice or not by choice) remains, as long as it remains a Chinese-owned entity. Facebook, of course, is similarly beholden to the US government – but, at least in theory, our government cannot get such data without a warrant obtained from a judge after showing probable cause of a crime or of a national security risk.

TikTok has been, at least in terms of public appearance, taking steps to distance itself from the communist regime in China – the social platform’s CEO, for example, is an American, Tik Tok does not operate in China, and the firm announced that it will stop operating in Hong Kong as a result of the Chinese imposing the anti-free-expression “National Security Law on Hong Kong” on the island. If it truly wishes to be viewed as less of a risk in terms of Chinese spying, however, it should move its headquarters to somewhere in the West.

So, how do I use Tik Tok safely?

Like most folks today, I have upgraded my smartphone in the last few years. After doing so, I factory reset my old phone – a still quite powerful Android device – and wiped all of my personal information from it. Onto that device I installed both security software and Tik Tok – without adding any other information about myself; I did not even set up a valid Google account. There is simply no data on the device to steal. And, any of the material that I post on to Tik Tok is material that I would share on other platforms such as YouTube – fully accessible to Chinese agents as well. As an extra precaution I also do not connect my Tik Tok-running device to my secure, primary home network.

So, yes, you will find me posting on Tik Tok. In fact, ironically, most of what I post today are tips on how to stay cyber-secure. And, my only regret when it comes to Tik Tok is that due to my workload, I have not been posting nearly enough.

Facial Recognition Technology Sent An Innocent Man To Jail – Responses Are Making The Problem Worse, Not Better
Many Security Cameras Tell Criminals When You Are Not Home – Even If Would-Be Robbers Cannot Access Your Videos